We were delighted to welcome back Joe Mc Hugh, Minister for Education and Skills to present our Junior Cycle students from last year with their Junior Cycle Profiles of Achievement (JCPAs). Minister Joe Mc Hugh began his teaching career in Loreto in the 90’s as a geography and maths teacher and it was a great honour to have him back with us in his role as Minister. Two of our current Transition Year students, Maeve Harkin and Chloe O Donnell opened proceedings and even told Minister Mc Hugh that we had redecorated the concert hall for the occasion!
Minister Mc Hugh fondly remembered his days as a teacher in Loreto. While commending our students on their achievements in their JCPAs, he noted that nurturing the whole student has always been very much a part of the Loreto ethos of education. He said that he has carried the Mary Ward values with him and that they have certainly helped him on his journey to where he is today. He also remembered fondly our late Principal, Nora Friel and said that the ethos espoused by her was very evident for all to see. Reflecting on Minister Mc Hugh’s time as a teacher in Loreto, a former colleague remembered him as a teacher who embodied happiness and positivity and said that his students loved him for this.

The Junior Cycle Class of 2017-2018 were delighted to receive their JCPAs. The JCPA is a new award that replaces the old Junior Certificate. As well as the students’ results of the State Examinations, the JCPA also records students’ achievements in Classroom-based Assessments and a broad range of Other Areas of Learning. Sr Gerardine, Acting Principal, noted that our students engaged in a wide range of other areas of learning during their Junior Cycle and encouraged them to build on these achievements in the future. 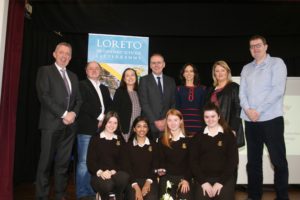 We also took the opportunity to launch our Coding initiative in conjunction with the Letterkenny Institute of Technology. This year twenty five of our Transition Year students are taking part in this coding module and are thoroughly enjoying and benefiting from the experience. Their newly acquired skills were evident when our new school robot “Toni” made a guest appearance and a drone flew over the audience and landed on stage surprising Sr Gerardine! Mr Paul Hannigan (LYIT) commented on the value of girls becoming more involved in STEM subjects and the importance of filling the skills shortage, particularly of women in this sector. We look forward to building on our links with LYIT in the future.

A huge thank you to Minister Joe Mc Hugh for taking time from his busy schedule to visit us here in Loreto.

This website uses cookies to improve your experience while you navigate through the website. Out of these cookies, the cookies that are categorized as necessary are stored on your browser as they are essential for the working of basic functionalities of the website. We also use third-party cookies that help us analyze and understand how you use this website. These cookies will be stored in your browser only with your consent. You also have the option to opt-out of these cookies. But opting out of some of these cookies may have an effect on your browsing experience.
Necessary Always Enabled
Necessary cookies are absolutely essential for the website to function properly. This category only includes cookies that ensures basic functionalities and security features of the website. These cookies do not store any personal information.
Non-necessary
We use Google Analytics to help us see how our website is been used. These cookies include _ga, _gid and _gat. We also have a Facebook feed on our site which sets cookies.
SAVE & ACCEPT