On behalf of the school community in Loreto Letterkenny we would like to extend our warmest congratulations to Sr Orla Tracey (Principal of Loreto Rumbek) who was one of ten women presented with an International Women of Courage Award at the US Department of State in Washington. This award was presented to her by the US Secretary of State Mike Pompeo and US First Lady Melania Trump. The award honours “women around the world who have demonstrated exceptional courage, strength, and leadership in acting to bring positive change to their societies, often at great personal risk and sacrifice” 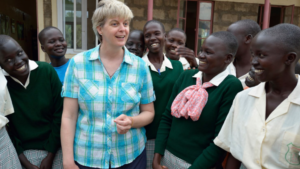 In 2006, Sister Orla was one of the Loreto sisters who started a new mission in Rumbek, South Sudan. They set up an all-girls boarding school. South Sudan is a country torn by war where a basic education is denied to many. In 2017, South Sudan was ranked as one of the world’s most difficult nations for girls to receive an education with only 2% of girls enrolling in Secondary Schools. Today, Loreto Rumbek is made up of a primary school and a secondary school and Primary Health Care. The primary school runs from primary 1 to primary 8 and it also has a kindergarten to serve the small children of the community and the secondary school runs from senior 1 to senior 4.

Sr. Orla expressed her hope for the girls at Loreto, after receiving the award,“Today, I was very aware of our girls as I was receiving the award. I pray that I am paving the way for them. My hope and dream is to see one of them with this award in the future.”

This website uses cookies to improve your experience while you navigate through the website. Out of these cookies, the cookies that are categorized as necessary are stored on your browser as they are essential for the working of basic functionalities of the website. We also use third-party cookies that help us analyze and understand how you use this website. These cookies will be stored in your browser only with your consent. You also have the option to opt-out of these cookies. But opting out of some of these cookies may have an effect on your browsing experience.
Necessary Always Enabled
Necessary cookies are absolutely essential for the website to function properly. This category only includes cookies that ensures basic functionalities and security features of the website. These cookies do not store any personal information.
Non-necessary
We use Google Analytics to help us see how our website is been used. These cookies include _ga, _gid and _gat. We also have a Facebook feed on our site which sets cookies.
SAVE & ACCEPT